Winter/Spring 2011and Another National Specialty

I’m still living in Tennessee with Cheryl and seeing Susan on the side (for herding practice).  We had a wonderful winter.  There was snow . . . lots of pretty deep snow.

In January, I got all groomed up and we drove to Chattanooga Tennessee.  Penni was there and I was so happy to see her, but there were so many other people to meet.  Janet was having a party.  It wasn’t really for me, but I was an important guest.  Janet and Scout were introducing all those people to our puppies.  Scout and I have eight babies.  There are three boys and five girls.  One red boy and one red girl are quite hairy, but the rest look like Scout and me.  I played with the puppies and met all the people.  There were lots of cameras there so we have many photos.

When we were getting ready to leave, Susan told me she was bringing one of my daughters home to Morristown.  Her name is Lowri and she is really cute.  It will be my job to train her. 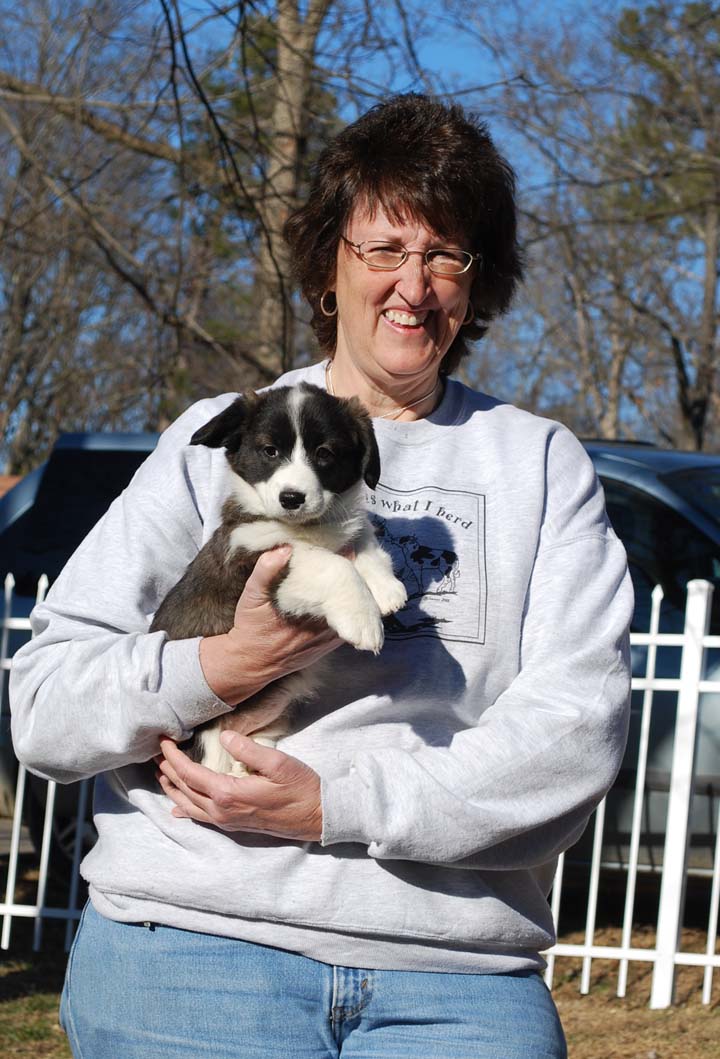 It turns out that Lowri doesn’t think she needs to be trained.  She’s kind of a bratty girl that does whatever she wants.  What she wants the most is the same thing I want – to herd sheep and ducks.  Lowri is pretty good for a baby.

So now Susan has another dog to train for herding and for regular dog shows.  I think Lowri is really pretty and very smart. 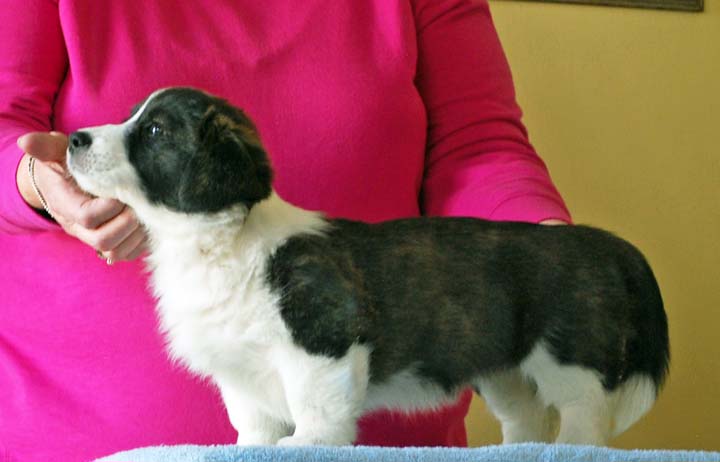 We were getting ready for some trials the end of March and then at the Cardigan Welsh Corgi Club of America National Specialty – try to say that with your mouth full of food.  Susan was pretty intense because Kearney was going to be in Intermediate and I was entered in Started Sheep and Ducks and Treasure was entered to get her HT.  You might recall that’s what I earned in October.  All of us were practicing very hard. 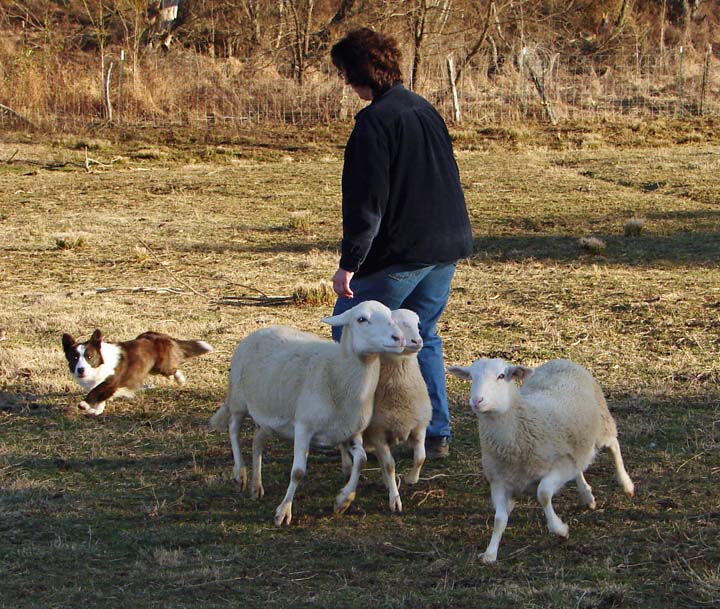 So, we all went to the Herding trial.  I earned the first two legs of my Herding Started Title, with a Reserve High in Trial one day, and 2nd place both days.  I think Kearney and Treasure did well too.  Kearney was High in Trial one day.  The plan was to finish our titles at the Nationals.  So we kept practicing until the first week in April when Susan completely filled up her van (honestly – COMPLETELY) and Kearney, Lowri, Treasure and I drove to Houston Texas.

We went to a town outside of Houston for the herding trials.  I don’t want to talk about the ducks because they would not cooperate at all.  They kept running for a canvas that covered their friends because they wanted to stay together.  I tried really hard to bring them to Susan, but they wouldn’t do it.  Now sheep – I understand!  I had two good runs and finished my HSAs title and was High Scoring Champion on Sheep both days.  Kearney was high scoring Cardigan on Ducks one day and Reserve High in Trial one day.  Treasure finished her HT and earned a PT leg.  Lowri just hung out and played with people and sat in laps.

When the trial was done on Sunday, Susan, Treasure and Kearney went to visit family.  Lowri and I stayed with Penni and G-Ma Carolyn and G-Ma Mandy.  Monday we moved to Houston.  Penni and Lowri and I went to watch some obedience – I know how to do that, and then we moved into our hotel room.  There was lots of grass outside and big trees where we walked.  It was pretty nice.  Then on Tuesday, we found Sherri and Lauren – how I love Lauren!  They were getting me ready for a dog show.  Tuesday night Lauren took me into the ring.  We played together and I was very happy.  There were three different judges that got together and decided I was the Best Brindle Dog.  We got a big pink ribbon.  Lauren and Penni were so excited. 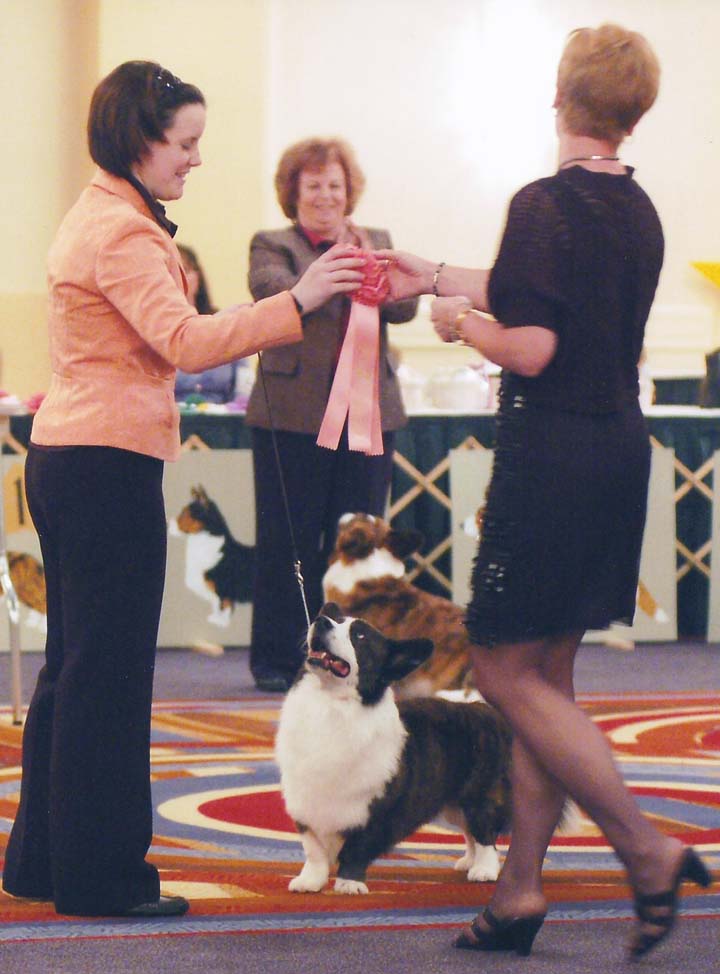 I met so many people at Nationals.  The ladies from Alaska were my favorites because they hugged me every time they walked by and they all knew my name.  They’d yell, “Hi, Chase.”  It made me wag all over.  Susan was back and she and Lowri and Penni and I sat and watched the show on Wednesday.  My daughters Nikki and Ali did very well in their Sweepstakes class.  Then Cheryl arrived at the hotel so we were all together.  I got to sleep with Penni at night for a few days.  It was so nice to be with her.

On Thursday, Sherri groomed me and showed me in the Herding-Titled Class.  We won and got another big pink ribbon.  It’s always fun to show with Sherri because she talks to me the whole time we are showing and tells me I’m a “good boy”. 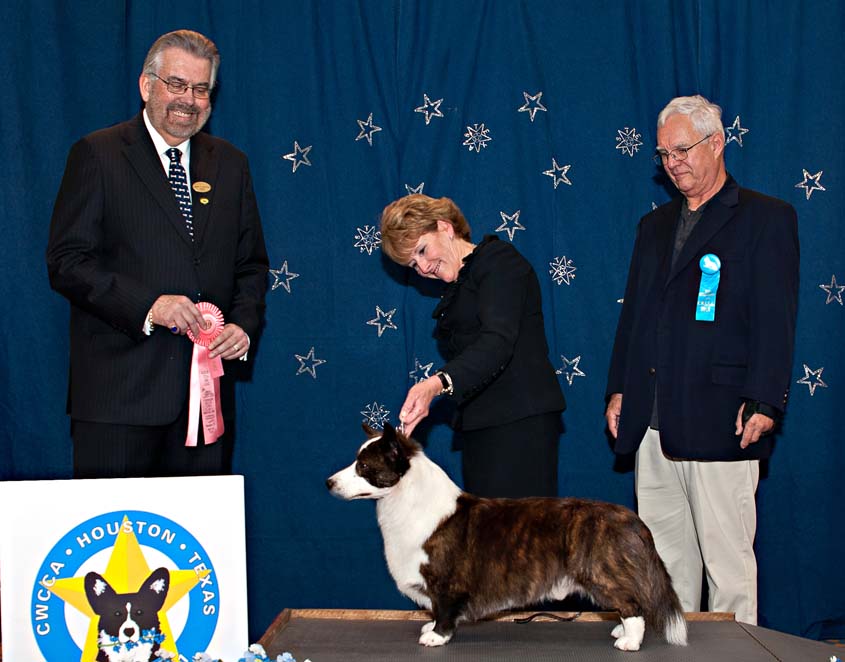 On Friday, it was really exciting.  Nikki won her class and then she was the best of all the girls in all of the classes.  I was really proud of her.  Her sister Ali placed third in the 12-15 month class.  Carolyn T and Paula own Nikki and Paula owns Ali – boy were they happy!

On Saturday they judged Best of Breed.  Because of the way the judge set it up, Lauren couldn’t show me so Cheryl showed me.  We had a great time and made it into the last group of dogs.  Then the show was over.  Susan and Cheryl put all their stuff back into the van.  They loaded up Kearney and Treasure and Lowri.  Finally Penni and I went to the van.  Penni hugged me and we said goodbye again.  Susan and Cheryl and all us dogs headed east to Tennessee.  Penni was flying west to Albuquerque.  I hope I will see her again soon.

I am going to have some more children in June.  They will be in Texas.  So I’m working very hard to learn herding.  I’ve got to make a living for all these kids.  Susan has plans for me.  We aren’t going to any more herding trials until Labor Day weekend (that’s the time last year that I first herded).  We are going to Ohio in August though for a big dog show.  Lowri is almost old enough to be a show dog and Susan has entered her in a show in June.  My very first son, “Holmes”, completed his Championship in May.  I’m so proud of him.  Nikki’s Championship is pretty close and so is Ali’s.  I’m glad all my puppies are doing well.

Cheryl and Susan give me lots of love and I am learning so much about sheep and ducks.  Cheryl is going to let me do agility – I love agility.  Penni promised that when I go home to New Mexico we will start tracking again.  I also love tracking.  I hope to have some more to write about soon.